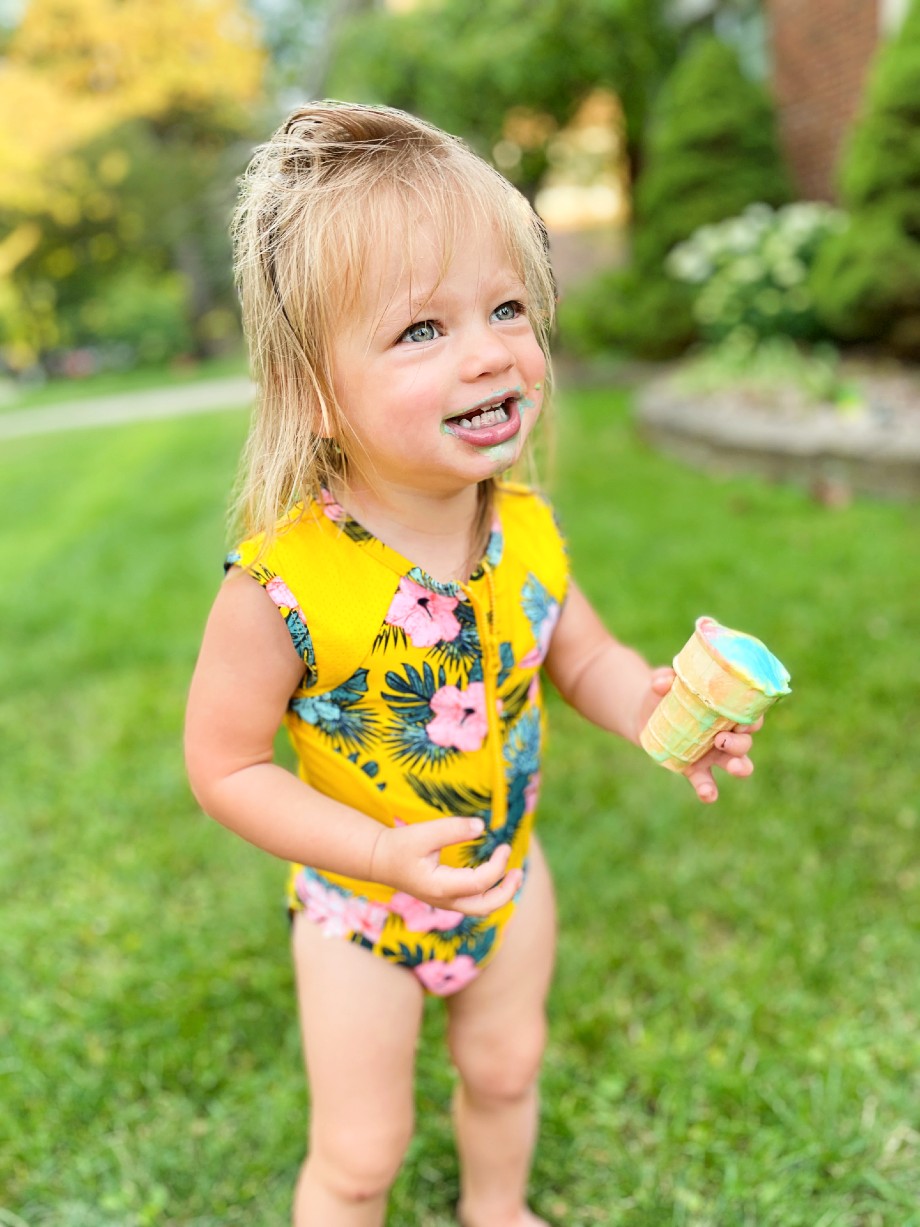 I kind of can’t believe that I’m writing this but my baby is 2 (on 7/10)! Lily is so full of life and such a joy to be around. Life has been pretty hard lately- we lost our amazing dachshund Ava and our basement flooded with 2 feet of water. Lily (and the other two kids of course!) keep us laughing, even when we don’t want to.

Everything going on with Lily at age 2: 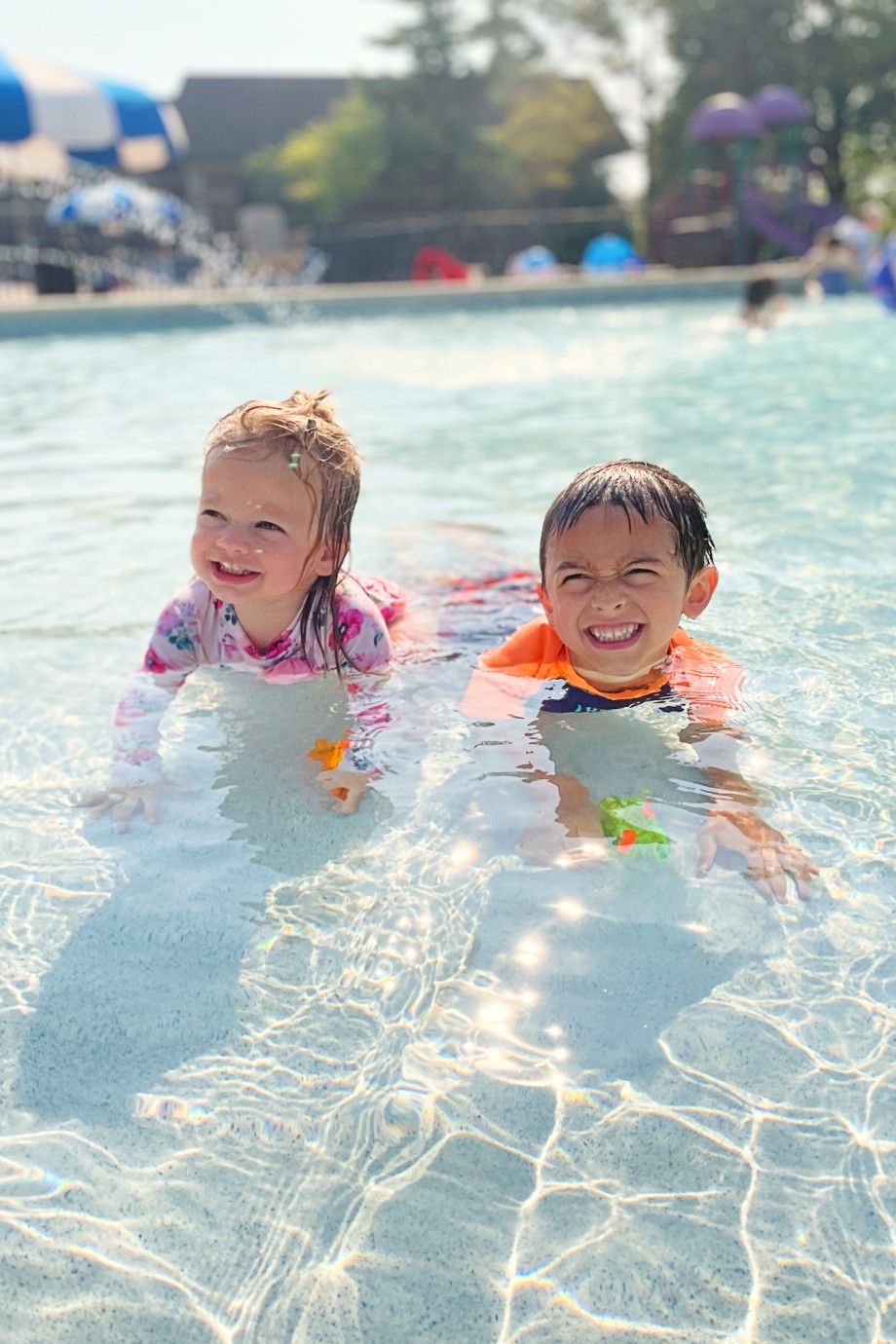 -Lily’s language has exploded the last couple of months! She can say 4-5 word phrases, can repeat most words we say and can answer so many questions.

-She loves to swim in the pool with Adalyn. Adalyn taught her how to kick and she has so much fun kicking her feet in the pool. 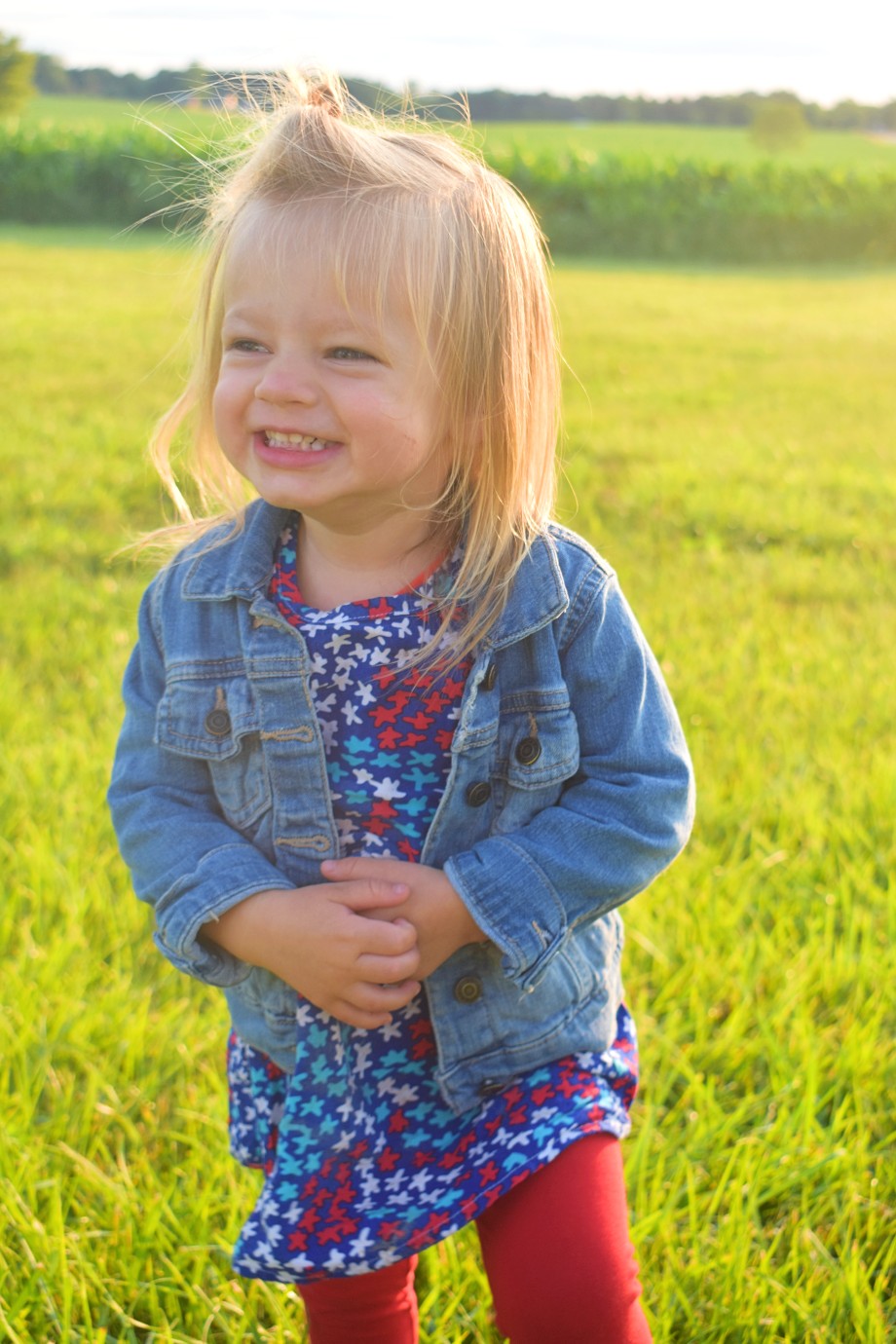 -When Lily doesn’t want something, you’re going to hear about it. She will scream “noooooo” at the top of her lungs. My other two kids never had an issue with anger like screaming or hitting and Lily does both of these things often. I think it is because she is the third child and that is how she gets heard among a couple of other kids. Obviously we are working on this. Right after she hits us (like one second after), she touches us nicely and gives us a hug. 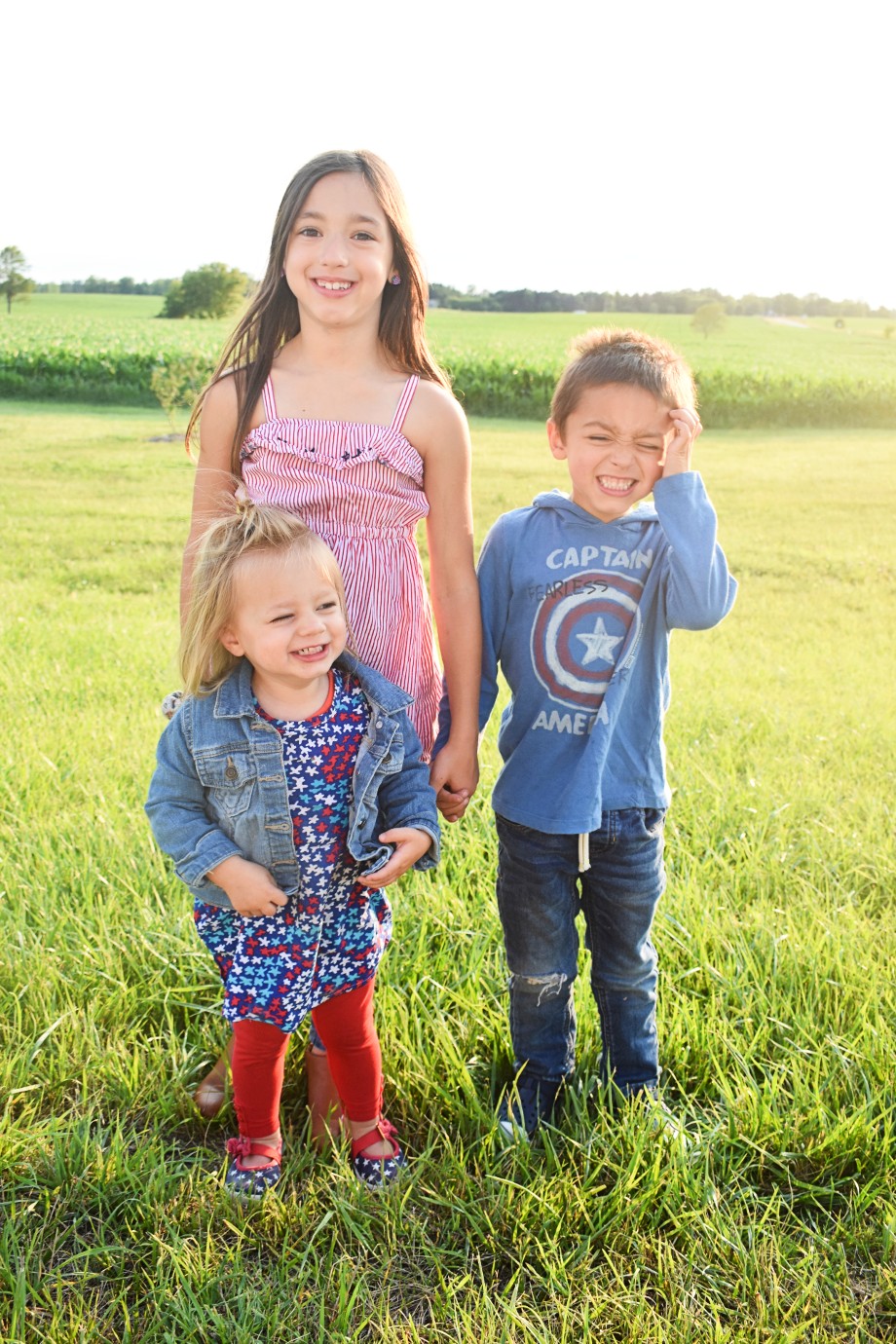 -All baby dolls are named “Baby” and are the most important item in our home right now. Lily LOVES baby dolls and sleeps with literally 6 of them. She takes them to the playground and holds them the whole time. She loves babies so, so much. 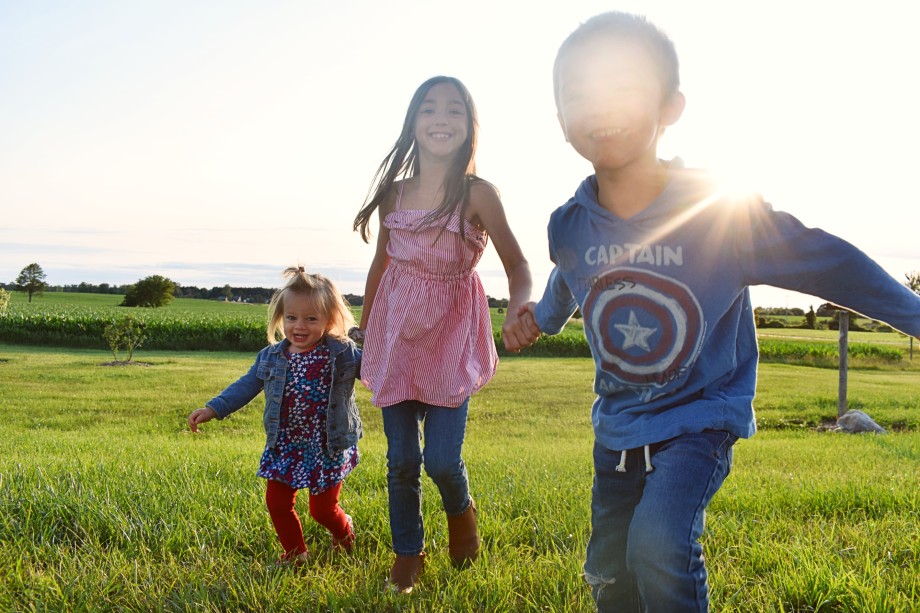 -Lily finally likes me to read her books. She didn’t enjoy this for the longest time. She loves the book Brown Bear, Brown Bear, What Do You See? and has us all read it to her again and again. 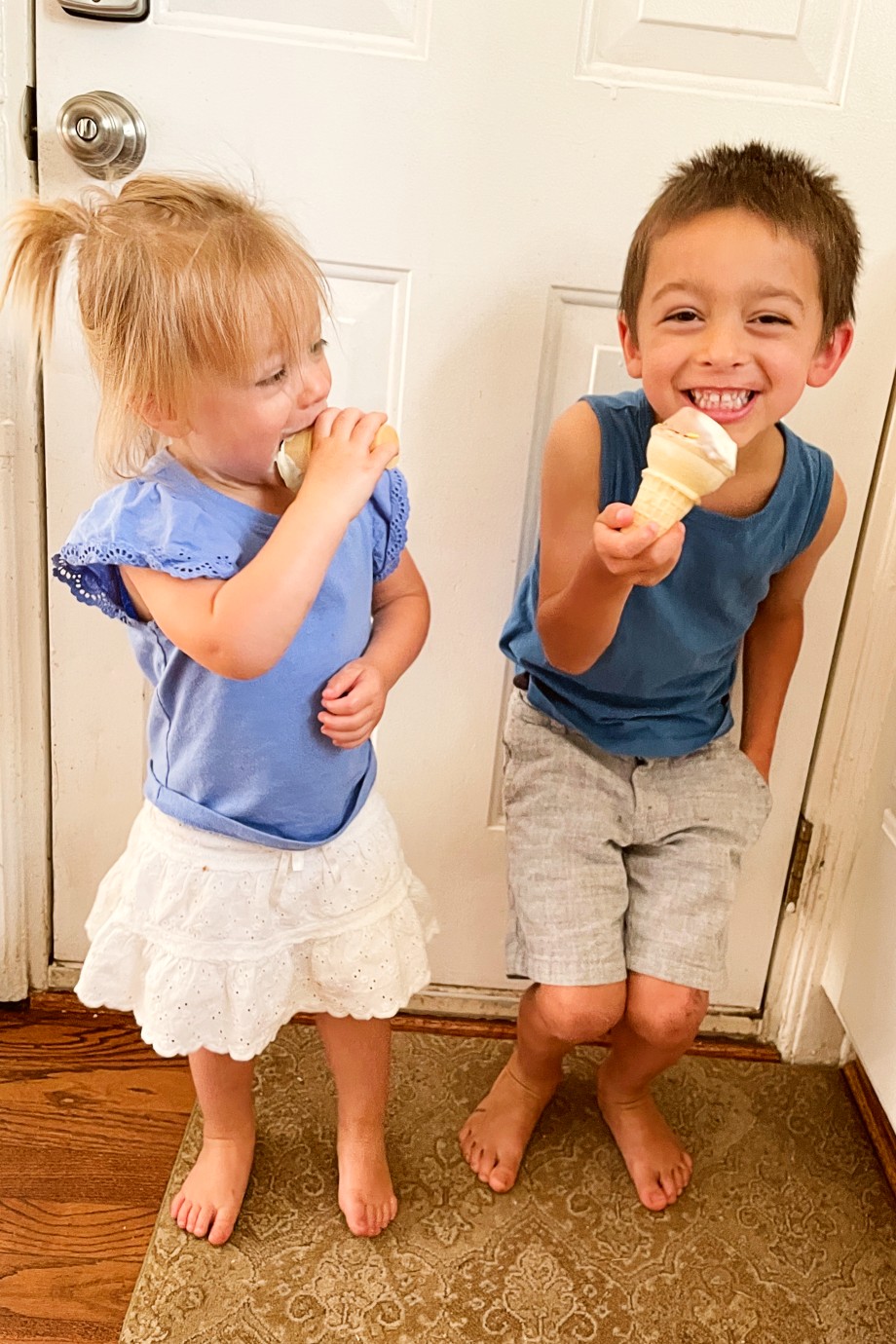 -Lily’s personality is more like a kid and less like a baby. After having to wear a helmet for plagiocephaly and having therapy for torticollis, she is totally fine and on track for her age which is great because we had a lot of concerns about her for a bit. 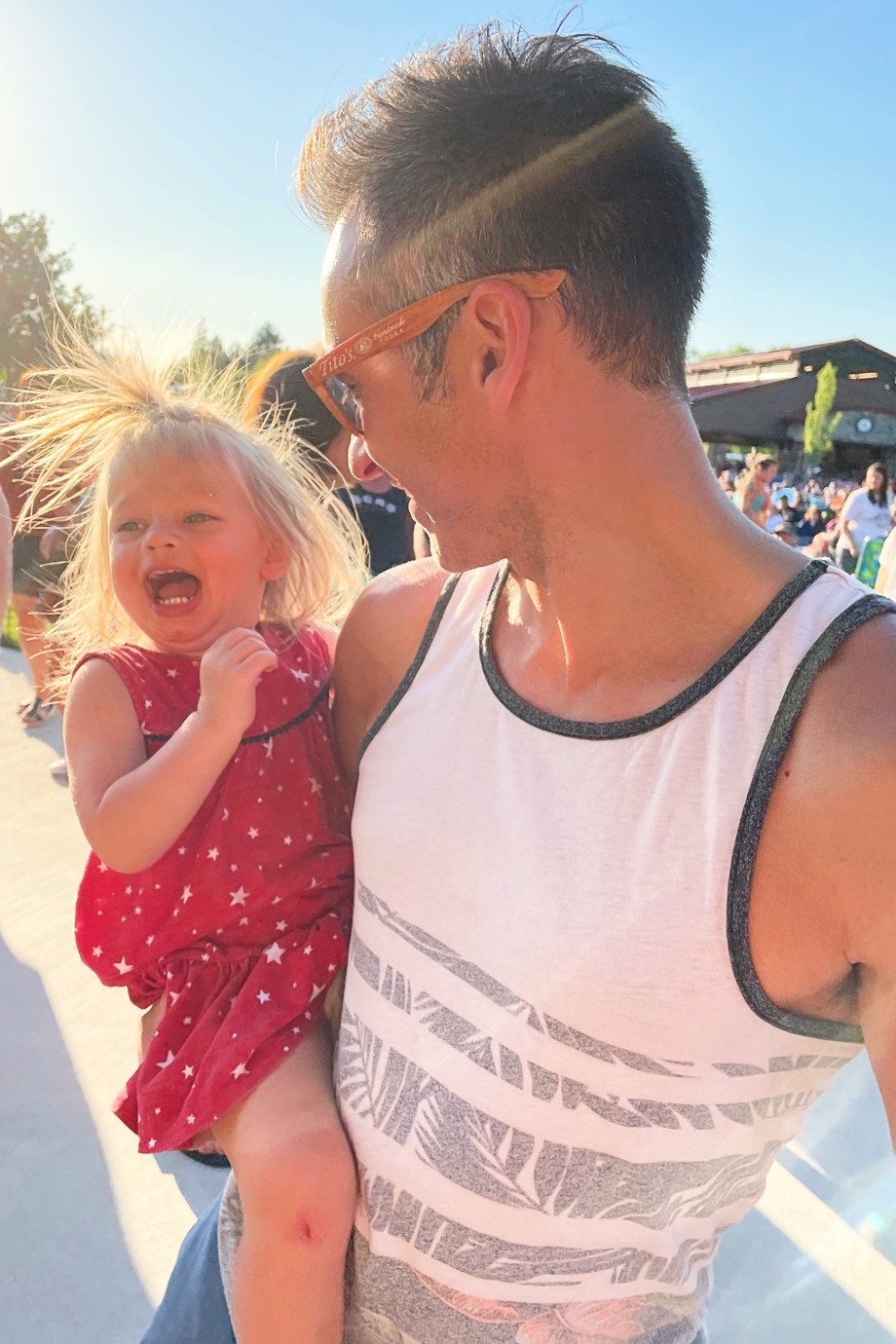 -Her siblings are everything to her. She loves to run to Adalyn to give her a hug. Adalyn usually gets her out of the crib for me and loves hanging out with her. Adalyn is a little mom to her and can get Lily dressed (if bossy Lily allows it) and truly loves helping with her sister. 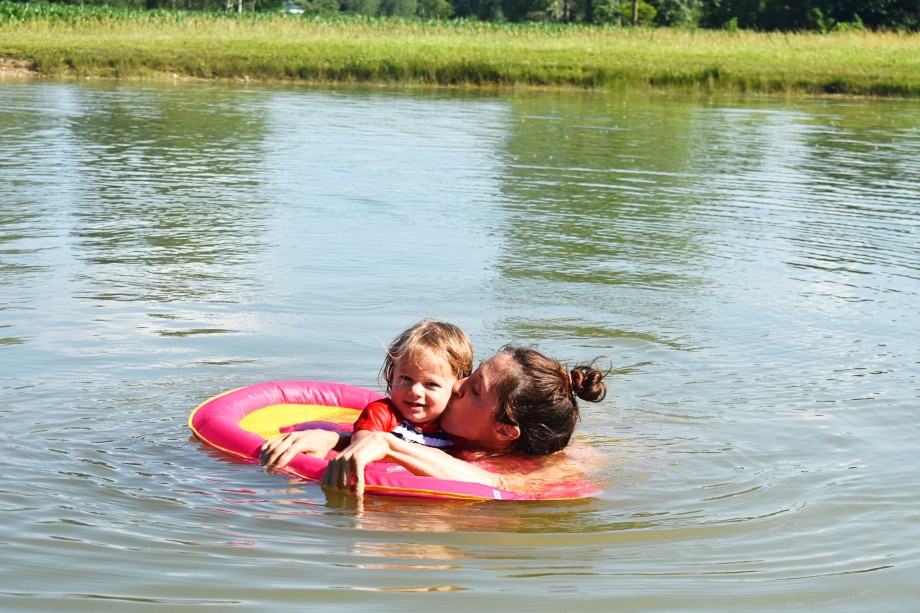 -Lily and Oliver love each other too but they are more like peers than the older sibling-little sibling relationship. They fight over toys and yell but Lily really looks up to Oliver a lot.

-Lily loves dogs so much!

-Lily LOVES her grandparents and aunts and uncles so much. She talks about them constantly. 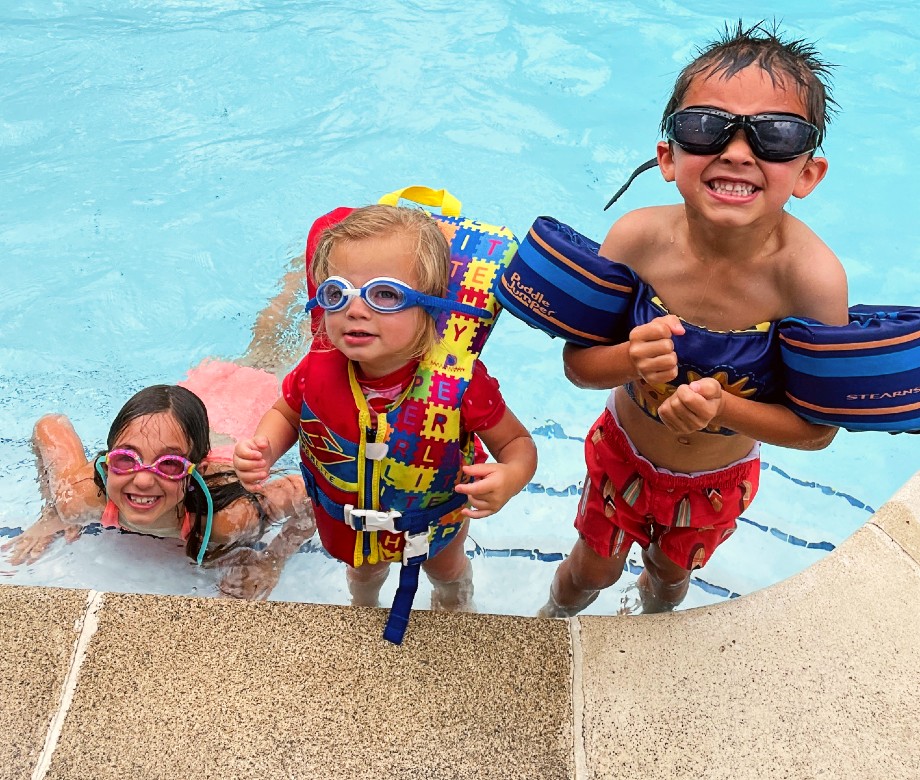 -Troy and Lily have a very special relationship. They play a game where they mimic each other and I think that Lily loves that she can get an adult to copy exactly what she is doing. They love pointing out each other’s bellies and Lily loves to tell him to “lay down” which means sit down. It is usually on the floor and she loves being able to boss him around. He loves it too. She gives him “bear hugs” where she basically growls. 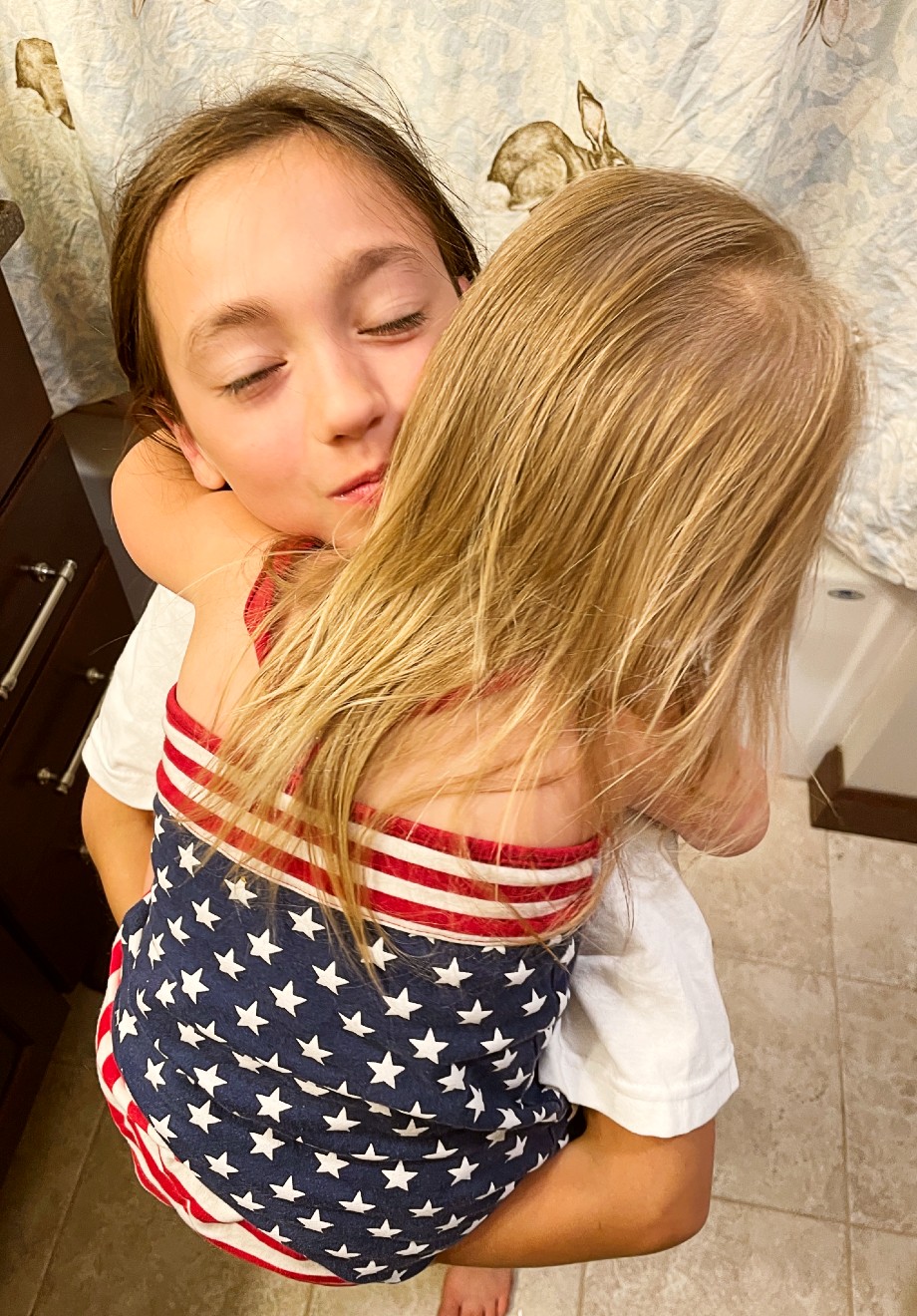 -Lily is super loving and loves to give kisses and hugs.

-Lily’s favorite foods are ham, bread, pizza, fruit and anything really. She is an awesome eater and she loves to drink milk. 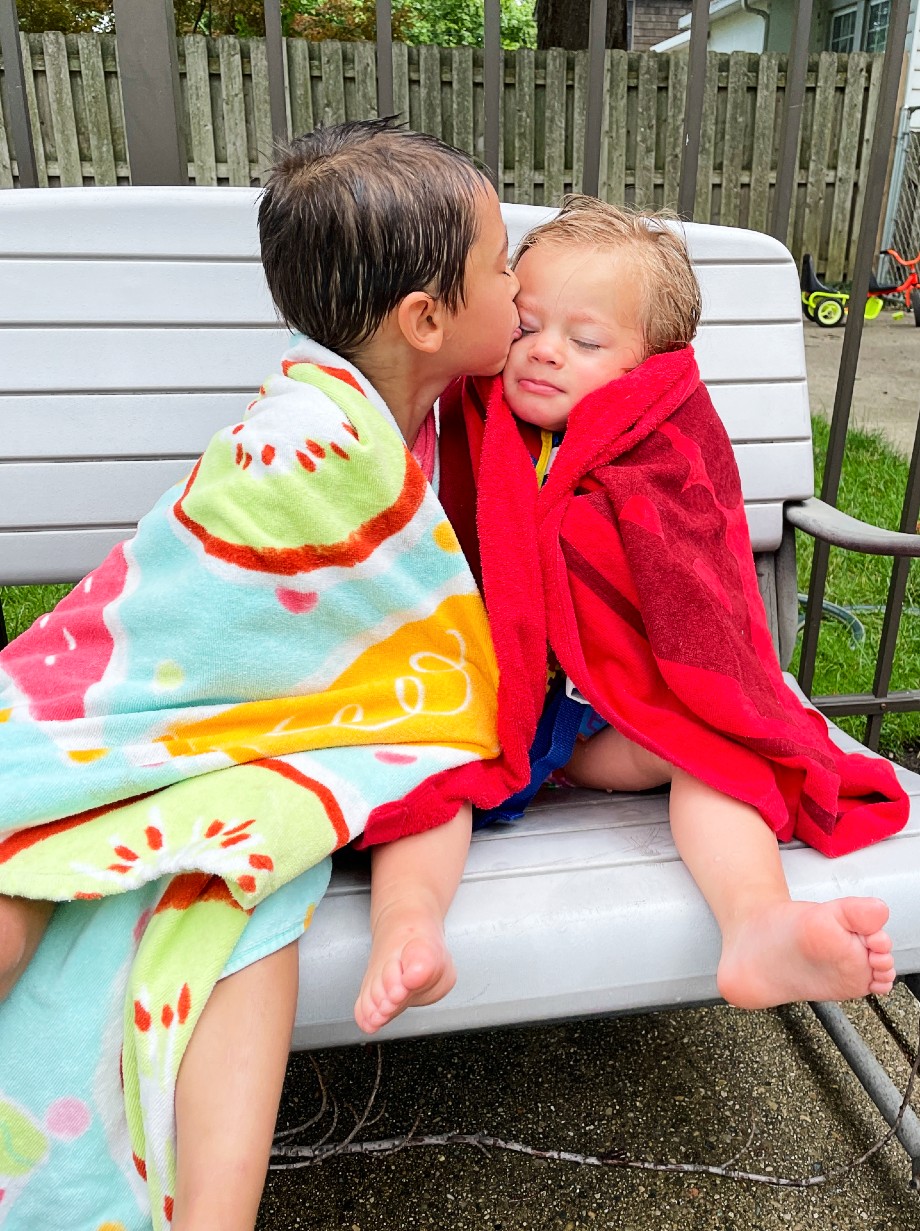 -We have been trying to teach Lily her colors for awhile but so far, no luck. We will keep trying!

-Lily is pretty easy to put to bed but a lot of times she will growl “mom” over and over again and wants to come play. She doesn’t want to miss anything! She naps for about 2-3 hours. 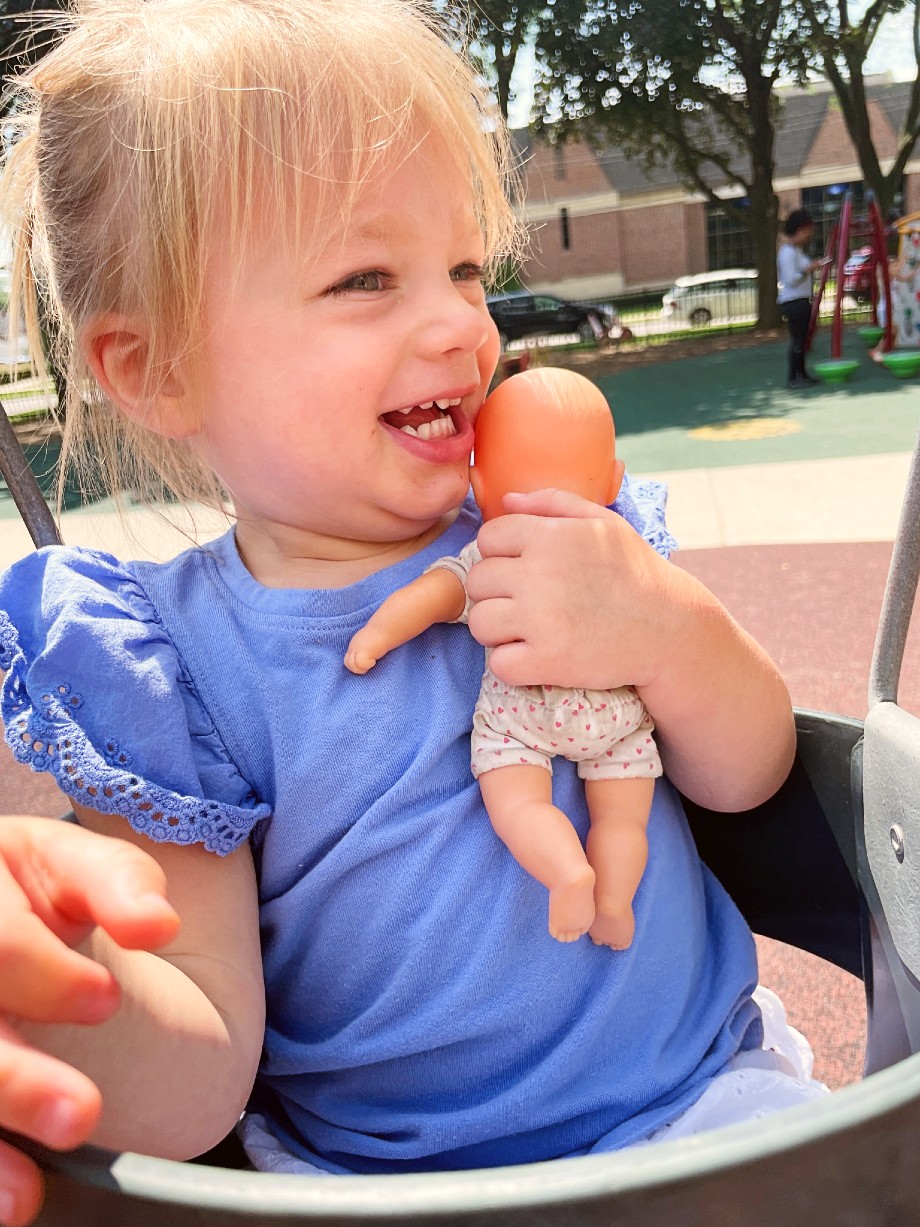 Life is such a joy with Lily! The perfect missing piece of the puzzle to the Hernandez family.

The most delicious homemade marinara sauce is ready in no time and is made with simple ingredients such as chunky tomato sauce, onion, and...
Read more
Recipes

How to Start a Meditation Practice

Mindfulness is the foundation of my work in the Mindful Nutrition Method(TM) and all that we do here at Nutrition Stripped, however, most people...
Read more
Nutrition

This post is sponsored by Terry Naturally(R) Vitamins. All opinions are my own.Greek Scrambled Eggs are loaded with feta cheese, fresh dill, tomatoes, onions,...
Read more

Why to Use Tea Seed Oil for Cooking

All about tea seed oil including how I use it in cooking, why it is a good choice for cooking and the benefit of...
Read more

What to do, where to stay and what to eat on a couples getaway to Traverse City, MI! Lots of hiking and beach ideas...
Read more

nutritionguardiantoday.com it's managers and its employees (collectively "The Company") do not make any guarantee or warranty about what is advertised or above. Information provided by this website is for research purposes only and should not be considered as personalized financial or health advice.
Copyright © 2021 Nutrition Guardian Today. All Rights Reserved